Here comes Santa Claus, Here Comes Santa Claus….yes, friends, last week we tackled a visit with the big man, himself. I have to admit that we were skeptical going into it as to whether or not we would find success, as last year was NOT a winner {there is no pic …MANY tears were shed}. Also, thinking back to his 1st Christmas in 2011, I wasn’t sure we could top that Santa pic ~ it was epic by my mommy standards & totes adorbs!! Here’s a look back on that one before I get to this year’s:

Back to this year’s adventure, we decided to go after work on Wednesday. My original plan was to see Santa at Millenia, but time is precious & since we’ve had luck with Oviedo in the past, we decided to give it another whirl there. Amazingly, no one else was in line when we arrived. Liam was in great spirits UNTIL we got up to Santa. Then, it was not fun & games. We didn’t want to be “those parents” who force a crying kid pic. HA! The photographer was super nice and since no other family happened to be waiting, she was able to work with us for a short time to get Liam comfortable to sit next to Santa. I want to note {in the most hilarious way} that Santa was NOT allowed to touch Liam. Snoopy even had to act as a safety barrier. Notice in these pics below that no part of Santa is touching Mr. Liam. LOL! We tried a few different poses but Liam caught on every time. Overall, I would say we had pretty good success and these came out really cute. Such the little man!

ok, Santa, you can read me a quick story….

Next up, we had the super fun, 4th Annual — Bengel Gingerbread House Decorating Party!!

The 1st year I was just newly pregnant and I honestly don’t even think I realized it at that point. 2nd year, Liam was just a few months old and we were just there to have a good time 🙂 …3rd year / last year, we decorated a house together but he had no idea what was happening. So, this year I was a little more excited to do it. I knew he still wouldn’t fully grasp the concept but could still have fun with it.

I have to say I was surprised that as Stephen & I began showing Liam how to decorate the house, and choose the candy that he wanted to put on it, he began TO.EAT.THE.CANDY — our child does not really like candy OR chocolate, so you can imagine our surprise when he began shoveling the M&M’s in his little mouth. HaHa! What a kid!

Let me also mention that little man had spied the Bengel’s super cool Polar Express Electric Choo-Choo Train that circles their Christmas tree when we walked into their house. Sooo, the whole time we did the gingerbread house, we kept hearing, “i wanna play choo-choo” …hahaha. Niiiice!! 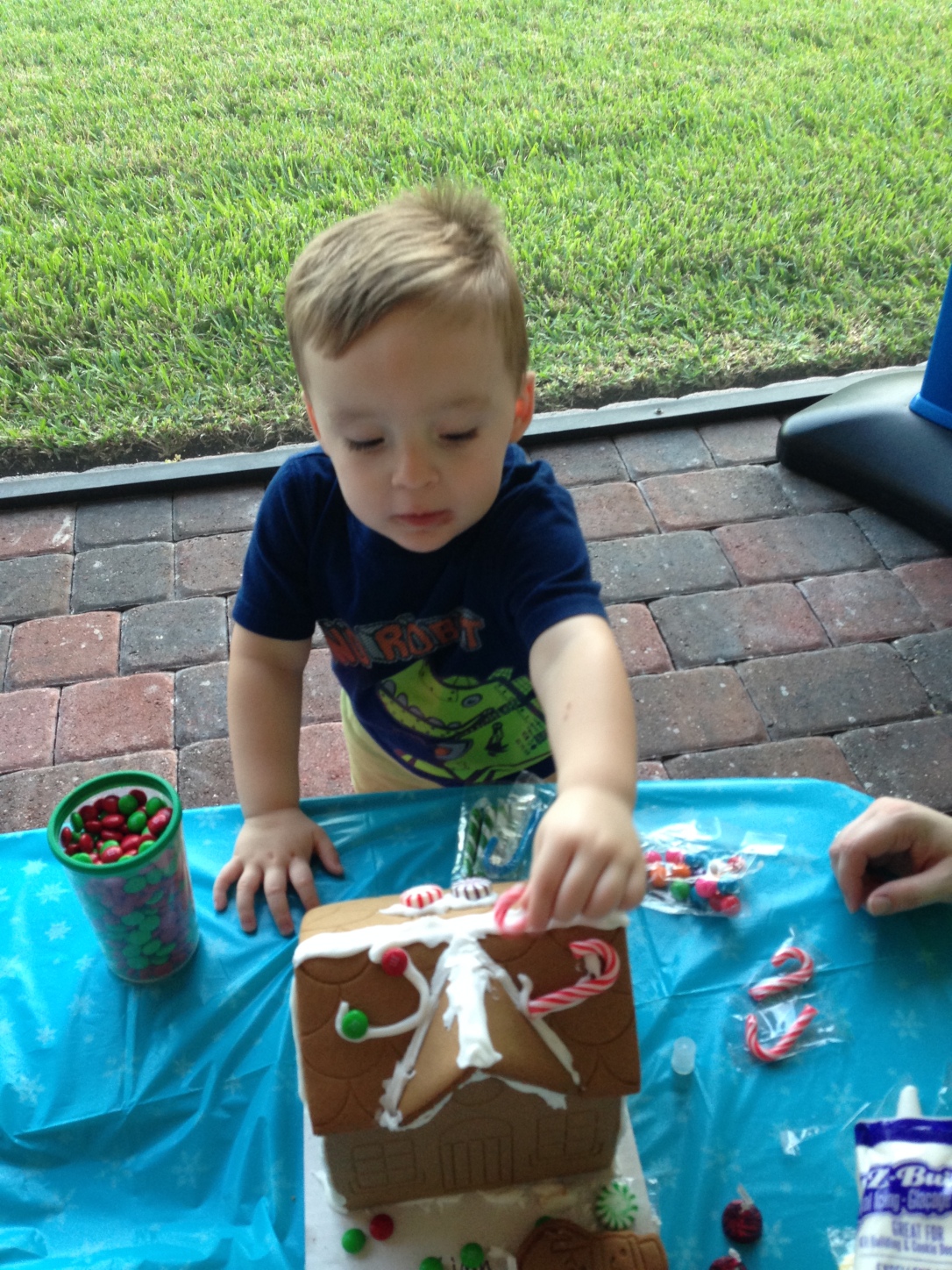 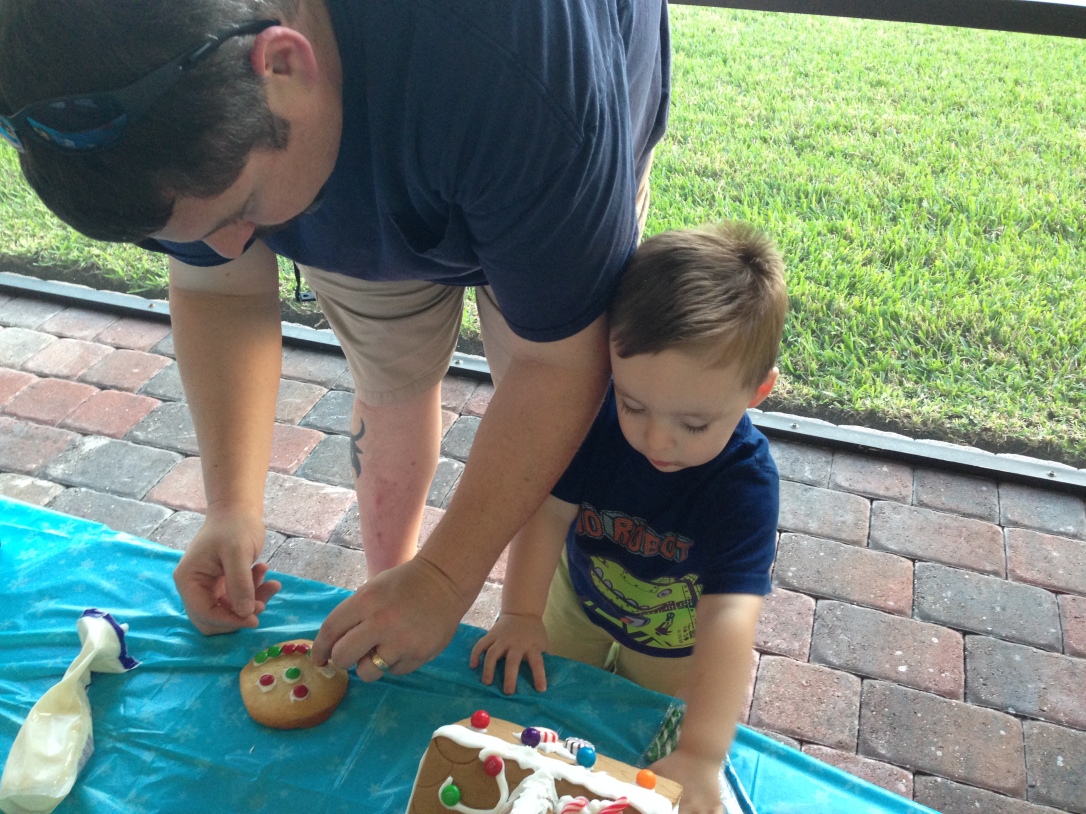 train-tastic!! Now THIS is where Liam spent a LOT of time after we finished his house. While the adults chatted in the kitchen, we just kept hearing the whirling of the train going around the track 🙂

Both sides of the Murphy’s finished house!!

After all the kiddos where done with their houses and playing in the house, I went back out on the patio and this is what we found:

Stephen & Lisa were decorating the leftover {pink} house and let me just tell you…it was INTENSE. Here’s what they came up with: 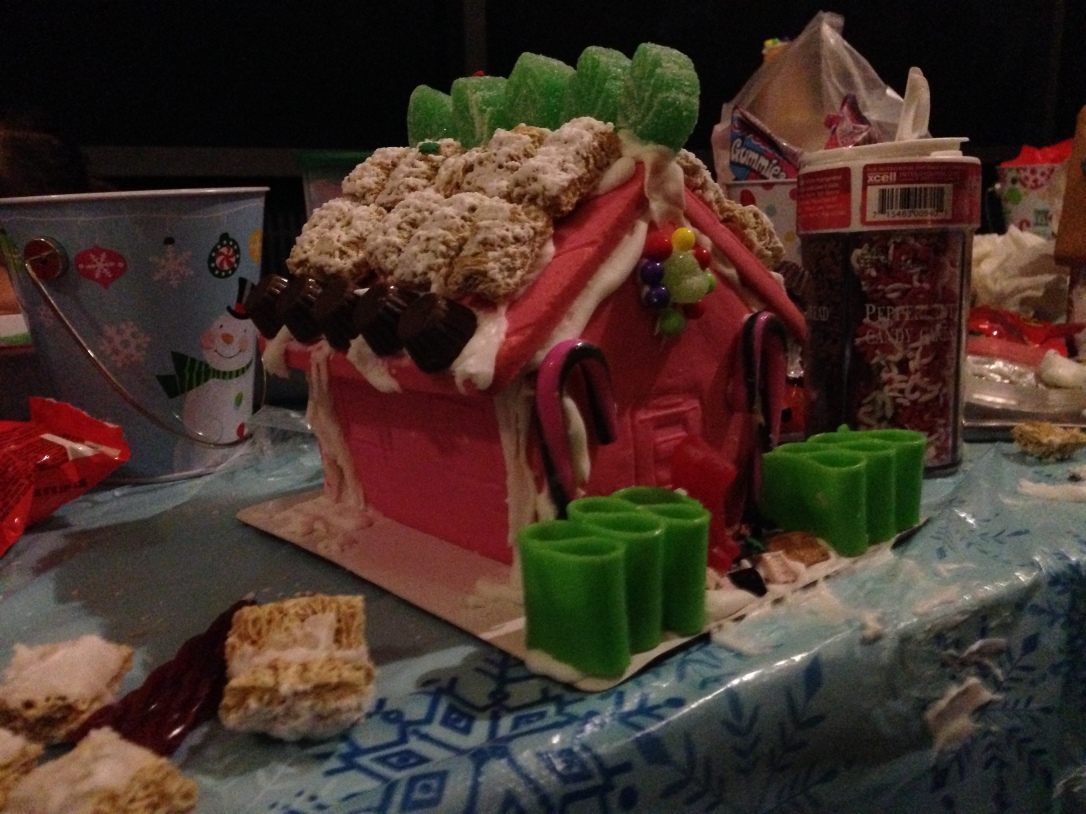 These two are already planning next year’s masterpiece….sad or exciting? not sure yet …LOL

2 thoughts on “Visions of Sugar Plums”