Seriously, how much fun was Halloween on a Saturday night?!?! I vote to have it on a weekend every year!

We kicked off the weekend with dinner on Friday night at IHOP. Liam got a FREE spooky pancake. So fun!

When we got home there was a special delivery from Papa G & G-Ma –> a Halloween tin of yummy flavored popcorn!

On Saturday, the 1st thing Liam said was: “it’s Trick or Treat day!!!” ….he could barely contain his excitement 😉

We continued our annual tradition of hanging out & eating dinner with our good friends & walking their neighborhood.  While Liam dressed up in a few of his different superhero hero costumes in the various holiday events we attended throughout the month, he had selected Baymax from Disney’s Big Hero 6 movie as his trick-or-treat outfit. He adores that movie! ❤ …I mean, it’s a Disney’s superhero movie, afterall, right?!?! 😉 ….It was hilarious because some of the people handing out candy did not know his costume & asked him if he was an Avenger. He, very matter-of-factly, stated: “No, I am Baymax”.  Then, he would turn around and yell down the driveway, “They thought I was an Avenger!!!”

Halloween is the look of mischief…..

Daddy did some cool modifications to the wings to get them to stick out and not be flopping around. We glued tongue depressors to the inside flaps & then, he painted them red. The mask also fit a bit tight & squished his nose. Stephen added a few foam pieces (such a thoughtful daddy!)….however, Liam still didn’t keep it on most of the night. Ya know, it’s still pretty hot & sticky here in FL 😉 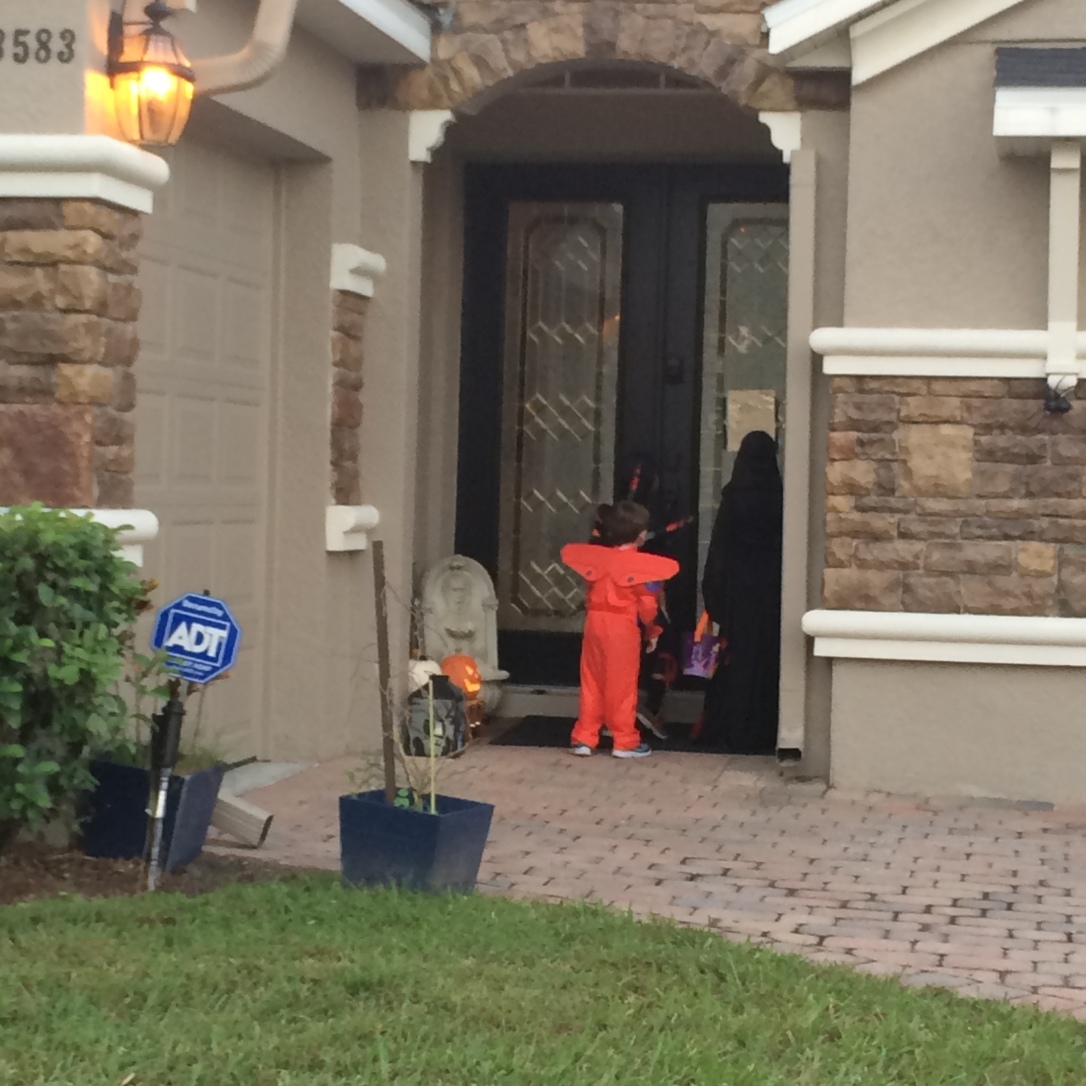 Liam was so polite at every house. He said, “trick-or-treat” and then, “thank you” after getting his candy. Then, to each person, I also heard him say, “Happy Halloween!” ….my heart melted! We stayed out for about 2 1/2 hours. We even brought our wagon because we thought he would get tired and need a rest, but no, he trucked along & kept up the whole time. Heck, he even pulled the wagon (by his request) toward the end. The only thing he did ask for was to dump his candy bag and “start over” because his little bag was getting too heavy. This mama had thought about that ahead of time, so I did bring a bigger bag….lol!

He ended up with quite the haul of candy by the time we got done. Here he is — tired, hot & sweaty…but so proud of his little stash 🙂 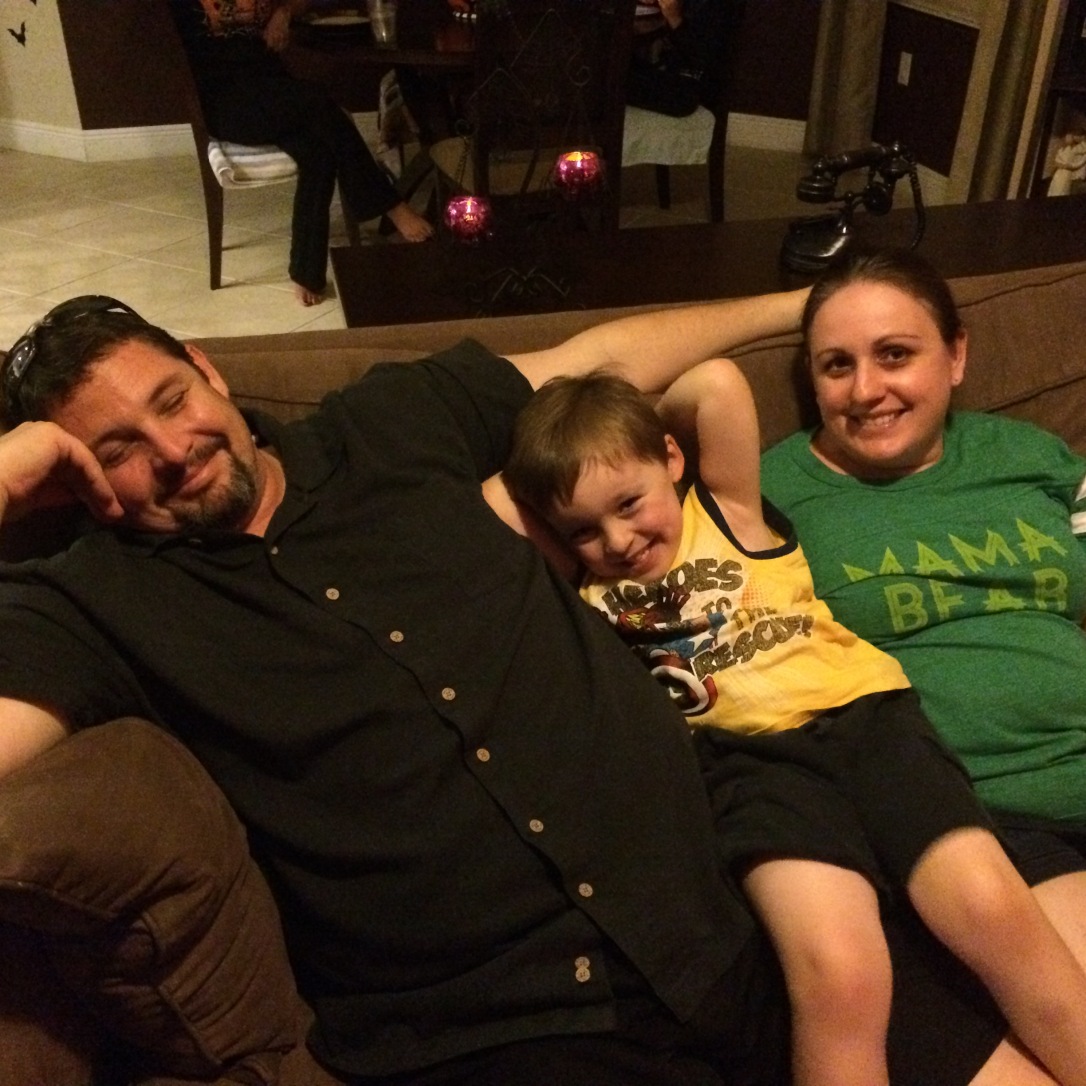 It was a great weekend! We were a tired little family when all was said & done, but I wouldn’t have it any other way. When Liam woke up on Sunday morning, he asked if it was still Halloween. I told him, no, it was now November. Then, he asked if was Christmas. I said no again. Little dude proceeded to cry….I felt so bad! Once I explained that Thanksgiving was next & reminded him what that meant, he was ok. Being a 4 year old is tough work sometimes 😉

Here’s a look back on the fun from the last few years:

2012 (back before the blog …check out this adorbs pic). This was Liam’s 1st time trick-or-treating!! We just pushed him right up to the doors. Haha! …but he held his little bucket! 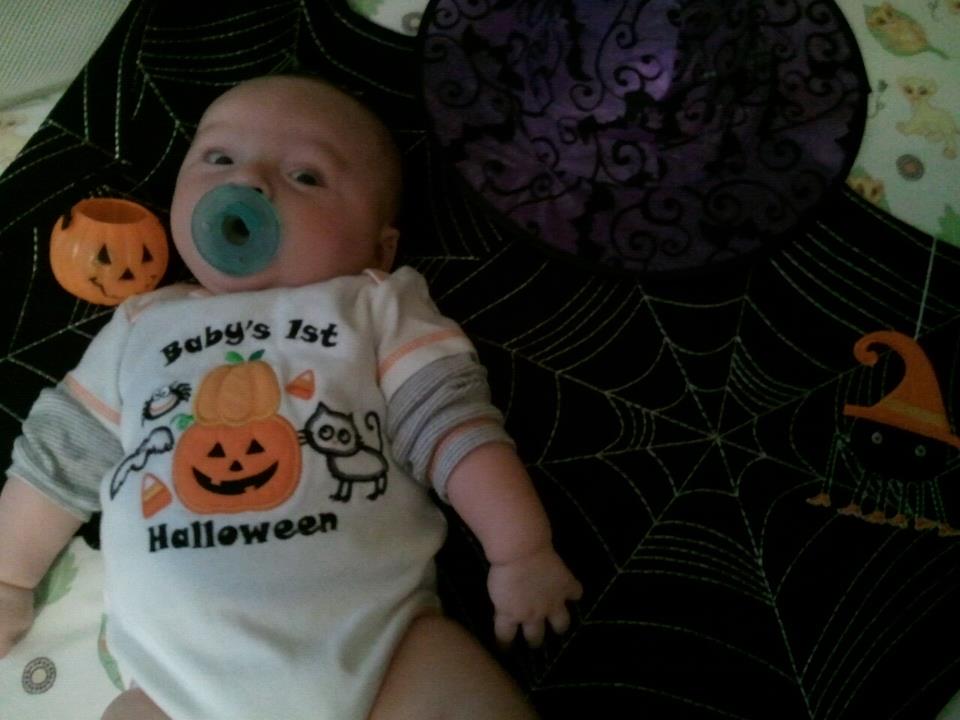