Happy 2nd Birthday, Liam Michael!! In lieu of a big party this year, his Daddy & I chose to make a very special trip ….his very 1st trip, in fact, …to the Magic Kingdom at Walt Disney World. It really was a magical day and one that we will remember always! I tried to take lots of pic since Liam probably will not remember this trip so one day he can look back on this day and smile …However, I think I am safe in saying he had a pretty fantastic time meeting his pals & taking in the sights 🙂

When we 1st got to the park, we stopped by guest relations, to pick up these snazzy buttons that we attached to Liam’s stroller (aka, birthday chariot). It was really sweet that the girl who wrote his name did a little Mickey Mouse head for the dot on the “I” of his name! I got to give credit to Disney and the cast members because they do it up right….as we walked around the park, they ALL noticed Liam’s buttons and SO MANY people were saying, ‘Happy Birthday, Liam’….at one point, I looked at Stephen and said I could have teared up because it was so cute! Yes, that was my sappy mommy moment of the day. Liam’s classy shirt is custom & hand-made courtesy of Personalize It By Jackie, The Boutique Mommy …LOVED it!!

Liam’s fav Disney characters right now are mickey & pals from the clubhouse. It was perfect timing that when we first arrived down Main Street, there was the Street Party Parade. We were just feet away from the float as his bestest pals went by. I wish you could have seen that sweet boy’s face as he waved and said hello….it was awesome!! I tried to catch a pic below.

The first ride we tackled was Dumbo. I rode it with the Liam…super fun! This little guy wasn’t scared a bit. He was actually ticked off at the end of it because he wanted to play in the water that you see under the elephants…that’s our boy! 😉 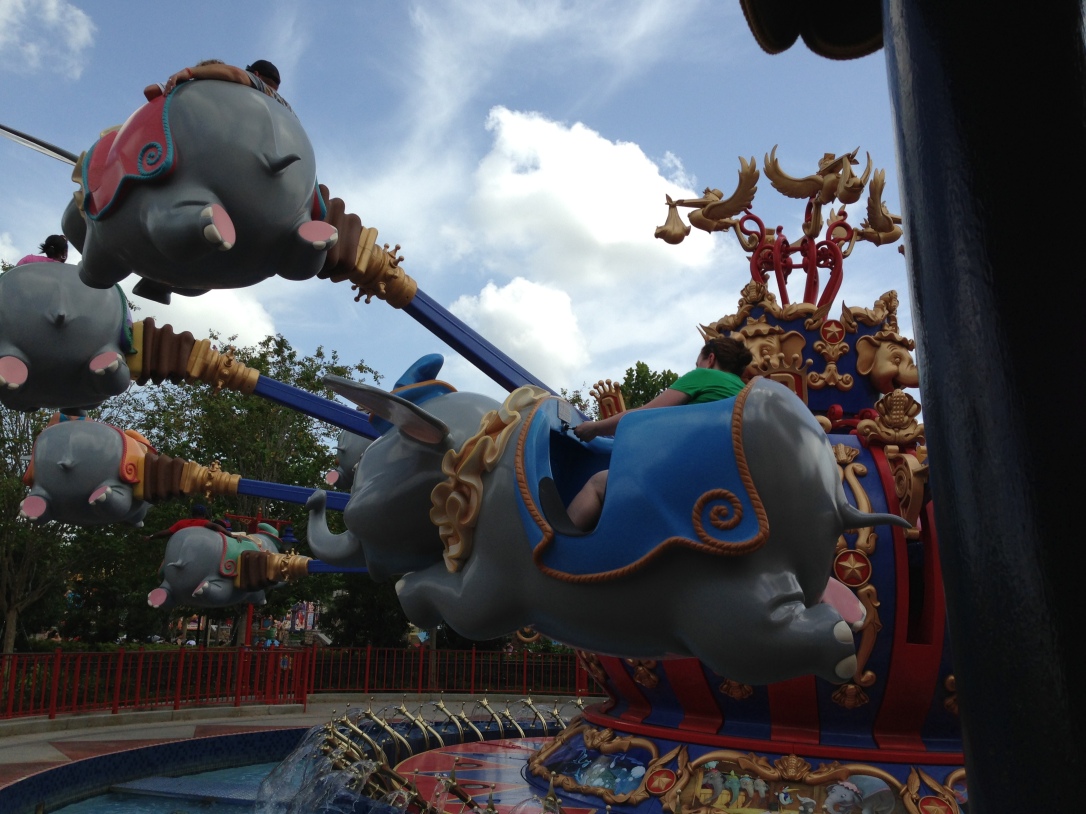 In the new Storybook Circus area…posing with Pluto, the Wonder Pup! Oh …by the way, if anyone is wondering (because I know you can see it in several pics) …Liam took a bad fall at school on Monday on the playground and had a huge bump right smack in the middle of his forehead…he’s perfectly ok, though.

It’s a Small World ….classic!! So much to see…totally reminded me of Disney as a kid 🙂

Here we are at the end of Small World….not the best pic, clearly but had to do it…shows how hot we were but loving every minute of it!!!

Two of my favorite pics taken of the day. From the Philmar Magic Show, which is 3D, hence the glasses. This was the only ride/show that Liam kinda got scared in because there were small parts that went completely quiet and dark.

It’s kind of funny that Disney does SO MUCH with all the princess stuff but nothing for the boys with prince things or anything like that. Anywhoo…This pic is from the carousal and I think that my Liam looks like a little prince on that big horse…very regal!! He loves horses and thoroughly enjoyed this ride!! He waved at everyone the entire time he was on this….it was adorable!

This is from one of the shows in front of the castle. Liam spotted Mickey & Minnie up there before we did!

At this point, Liam was tired of us and all the pics, so he left us and was cruising around the castle…KIDDING!! 🙂

All in all, we had the most wonderful day ever! Even despite the incredible heat and crowds…which, neither, we amazingly seemed to mind. As I close this post out, I want to share a special video we took of our little guy on the way to the park.

The rest of our birthday celebrations with our special guy are coming soon in part 2…there was too much fun to fit in one post! Until then….