So here we are, at the tail end of January — another year gone by and now we’re welcoming in 2017! I feel like so much happened in 2016. Maybe it’s because we’re a young family? Maybe it’s because I’m just a sappy, sentimental kinda gal? ❤ — I like to take the good with the bad so while life isn’t all roses, we choose to be thankful for what we have & what we have experienced ….and we look forward to another year that we are blessed with! Cheers!!

We ran in the New Year quietly at home with just the three of us, but we had fun. The boys were playing with Christmas toys {Hot Wheels} gifted from Mimi & Papa D, so they were in heaven. For the 1st year, we let Liam stay up as late he wanted {or could stand it….he’s a light weight 😉 } ….he was getting a kick out of watching New Year’s Rocking Eve with me, but by 11:00ish, he crawled into our bed with Stephen at the commercial and that was all she wrote. The two of them passed out. LOL!! I watched the ball drop with the cat 😛 — I recorded it so they could see it in the morning. It was hilarious! ….We had done a family toast with sparkling grape juice waaay earlier in the evening so it was all good!

In January, we went to the Amway Center downtown to see Ringling Bros. and Barnum & Bailey® Presents LEGENDS. Little did we know, that this would be our last Ringling Bros. circus, as they are actually closing down in May.

In May, we dedicated Liam at our church. We are also so blessed & thrilled to say that we now have a church home for over a year. We’ve been consistently going each week & it’s been wonderful for all of us. This was definitely something that Stephen & I kept wanting to do and find a place that felt like home, and it was very important to us with Liam getting older. ❤

In June, this little blog celebrated it’s 3rd birthday. It’s always fun to look back on past posts & pictures. Love to see the memories! As I have said in the past, I appreciate those of you who follow along with our adventures. As fun as it is to post, it actually is a lot of work to maintain this blog, but it’s something I enjoy & continue to do for Liam as a way to keep track of our memories for him ❤

In June, Liam graduated from Pre-Kindergarten. I cried at his graduation ceremony when they all walked down the aisle to Pomp & Circumstance…..all I could picture was his 18 year old self and I lost it, like a baby!

Liam turned 5 at the end of July, and {holy cow!} started KINDERGARTEN in August!! I thought last year’s start of Pre-K was a crazy milestone, but this is over the moon! We celebrated his birthday with a splash park party that was a super fun time with friends and family. We also went to the Jacksonville Zoo on his actual birthDAY. Kindergarten is proving to be a mindblowing experience for Stephen & I — seriously, it’s NOT the Kindergarten we went to as kids. I remember naptime, snacktime, and playing with toys. Fast forward to today’s Kindergarten and it’s serious learning …..and the kids LOVE IT! That is the awesome part for us. While we are trying to wrap our minds around it, Liam is thriving and loving life. It definitely makes your parent heart happy, and you just try to go with the flow. Things are just much more advanced and technology based than I anticipated they would be, but that’s ok!

Since he wasn’t in daycare during the summer for the 1st time EVER, he spent his 1st summer in CAMP! He had a blast 🙂

At the end of June, I celebrated two-year’s of writing with Orlando Moms Blog ❤  ….So, at this point, it’s now been about 2 and 1/2 years that I’ve been on board. You can can link over to my posts with them HERE

In September, we added a new member to our family! — at the time, Stephen brought home an adorable 2 lb kitten that Liam named Simba. We originally intended not to keep him but well, ya know how that goes. He’s now trying to play with Timber on the daily 😉 — more details & pics to come soon!

In September, Liam started martial arts classes! He is loving it and it’s something we are engaged in with him, as a family, as well.

I’m not one to really choose a single word or resolution, but I like to have goals. For this year, I want to focus on calm {which can mean a plethora of things on any given week} and organization. I have a few tools to help me get there. My trusty Emily Ley planner {for home}, Erin Condren planner {for work}, and Lara Casey PowerSheets to plan those goals! I think of it this way — Life is busy but it doesn’t have to be messy 🙂

Liam will be turning 6 this summer and then off to 1st grade! He’s already talking about both. I can’t even think about summer camp options right now, let alone, the next school year.

We are continuing to enjoy our new church home, and in doing so, are becoming more engaged through serving and participating in events. We are excited to see what this year has in store as the church also continues to grow!

We got annual passes to Disney for Christmas, so we plan to pretty much live there on the weekends. Hahaha! — Seriously, we’ve already been there every weekend this month. Definitely already developing an obsession, but it’s super fun! This is the very 1st time that Stephen and I have ever had annual passes there, so we are, for sure, just as excited about this as Liam is 😛

As, we all too commonly hear as we grow older, the years seem to fly by in the blink of an eye. This one definitely did for us. As I look back on last year’s New Year’s post, I can’t believe how much Liam has changed. Scrolling back through the year’s pictures reminds me how much he is growing right before our eyes ❤

We revamped the blog with a new look back in June & that was actually our busiest day of the year for page views! Thanks for all the love for me & my boys this past year. I started this little blog a few years back as a fun hobby, but also with intentions to someday turn this into a series of keepsake books for my little man. Ultimately, that is why I do what I do. Keeping track of our memories for him 🙂

Liam turned 4 this year and started Pre-Kindergarten! Such a huge milestone. We celebrated his birthday with a wonderful splash park party with friends & family. Pre-K has been an amazing experience, thus far, and Stephen & I can’t believe how much he is learning so quickly. He can write his full name. All the letters of the alphabet and his numbers through ten by heart. He can count to 100. He knows all his colors. Just this last week, we learned he can spell numbers 1 through 10….I have to say we were blown away. I, mean, he’s 4! I don’t think either one of us were doing these things at 4. Times have definitely changed. We absolutely LOVE is Pre-K teacher, Mrs. Samar, and her assistant, Ms. Kaylee. Can’t wait to see what the 2nd half of Pre-K brings!

We made several home improvements this year. I really believe that more you do to your house makes it feel more like a home, and makes you feel more invested in it. At least, that is the way we feel about it! We put a new roof on in late spring. It looks awesome! We changed the color of the shingles in prep for painting the house, which will be coming in the next year or so. We re-modeled our master bathroom. We actually had some mold issues in the shower, so we were SO glad to have that resolved! The finished product was beyond words. We literally felt like we had a whole new room. I will have to post pics of this sometime. In late August, we had a water leak in our office / playroom.  Anyone that has been though this knows what a mess this whole process is, but eventually, we got things cleaned up and back on track. It allowed us to completely (I mean that literally) clean that room out and re-do it. We are still getting the finishing things put back in there, and I’ll have some pics up of that up soon.

Oh, and we canNOT forgot that we moved little dude out of his nursery gear and into his big boy room in late spring / early summer! That was a pretty big undertaking, as we completely changed out his room with new furniture, decor & paint, but it was such fun!

At the end of August, I celebrated my one-year anniversary for writing with Orlando Moms Blog. This is a great group of gals to be a part of, and I truly enjoy it. You can link over to my previous posts with them HERE. 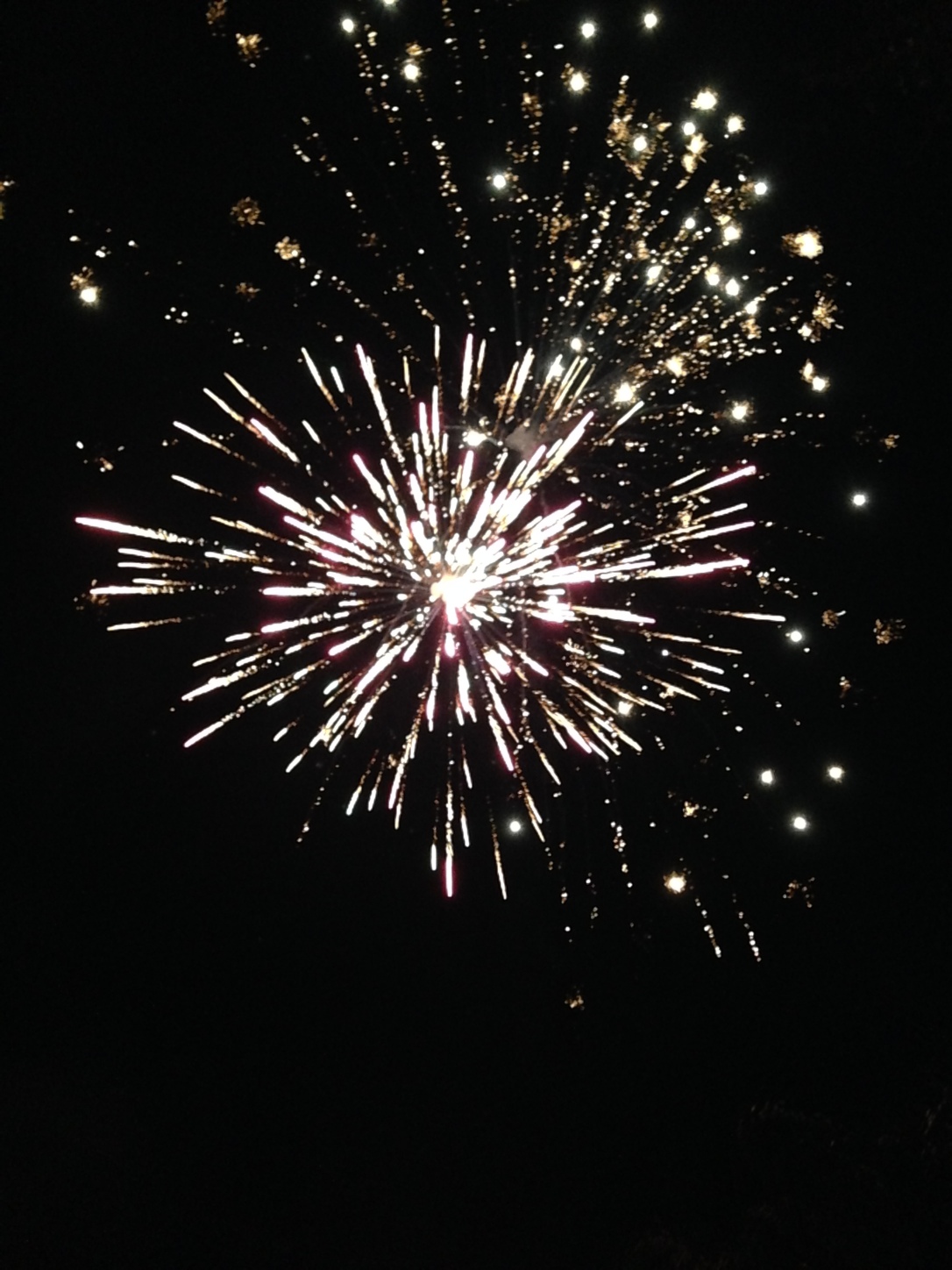 We rang in the New Year quietly at home, but that’s the way we like it. Little man helped me make some yummy chili in the morning that we had for dinner. We put on our party hats in the evening and headed out front to play with the rest of our fireworks left over from the 4th of July. Our neighbor had some big fireworks so that was pretty cool, as well! I caught this pic above as one of them went off.

Liam will turn FIVE this year & begin KINDERGARTEN ….hold onto your seats, this mama is gonna lose it! 🙂

We have some more projects around the house we would like to do, so we shall see!

I’ve declared that we are going to start eating dinner at the kitchen table with NO electronic devices (imagine that, right?!?!). Overall, I want to put down our devices & just.be.more present. I can check things when Liam’s asleep or on my lunch breaks. I can rearrange to make better choices. I read this article in The Wall Street Journal & it really struck a cord. I don’t want my little one to grow up thinking he’s less important than me checking my phone / iPad or having an attitude because of it.